This protocol achieves the functionality of Quantum Cloning. The term Probabilistic Machine identifies that the output copies are exactly identical to the original state but the protocol is not successful in all of the rounds. The probabilistic cloner is not a universal quantum cloning machine and it is limited to a special class of input states. The laws of quantum mechanics allow a probabilistic cloner to make copies from a set of linearly-independent quantum states. 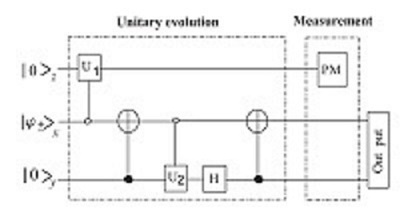 are the original qubit, blank qubit, and assistant qubit, respectively.

respectively mean that the control states are

indicates the operational qubit of the CNOT gate.

denote the unitary operations controlled by qubit x (explained in details in the Pseudo-code section).

is the Hadamard gate.

The probabilistic cloning machine can only perform effectively for a special set of input states. It was shown that states chosen from a set

can be probabilistic-ally cloned if and only if the

are linearly independent. This protocol in general consists of three stages as follows:

General Informaton: The special case of the above probabilistic cloning machine is the following protocol for two nonorthogonal qubit states. The input states for this machine are presented in the following form:

are two orthogonal bases of a single qubit.

here we labelled the three qubits by x, y and z

Finally, the quantum circuit which illustrates the above stages can be described to consist of following gates and parts which have been also shown in the figure in Outline